Nathalie Du Pasquier was in awe when she visited Emanuele Bevilacqua at his family-run weaving company, where centuries-old wooden looms receive meticulous maintenance from him personally on a daily basis.
“The small defects in the wood are what bring the fabric alive,” says Bevilacqua. Brocade, satin and silk damask are still woven on the looms, including the precious soprarizzo velvet Bevilacqua is famous for, an intricate combination of cut and uncut pile that gives a three-dimensional textural effect. “The place is unique, something very rare. Plus, it was my first experience with weaving, and it has been a wonderful and intense experience,” says Du Pasquier. 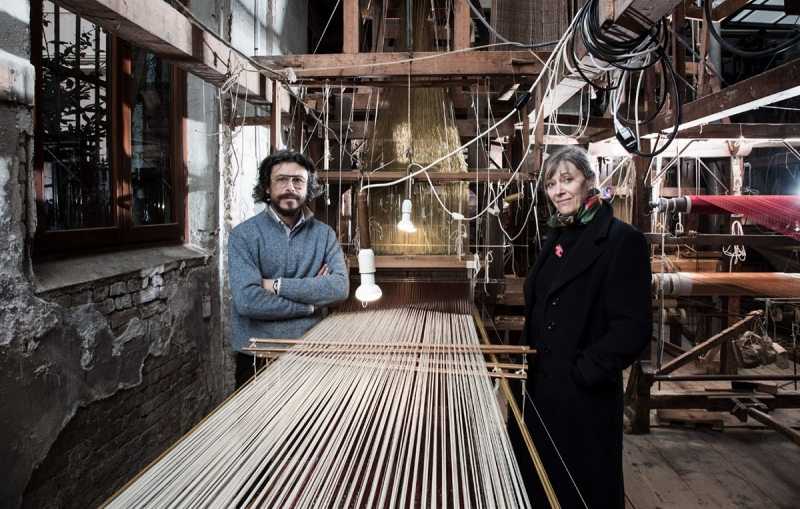 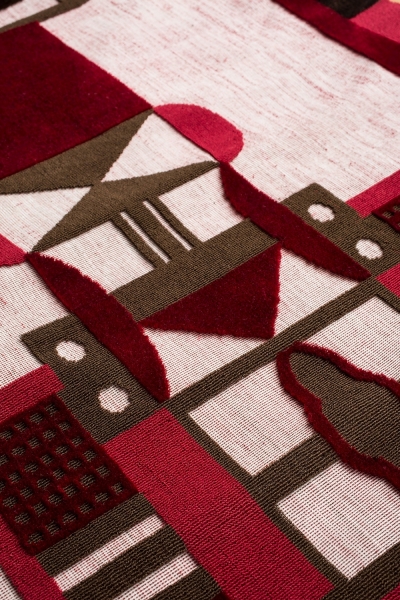 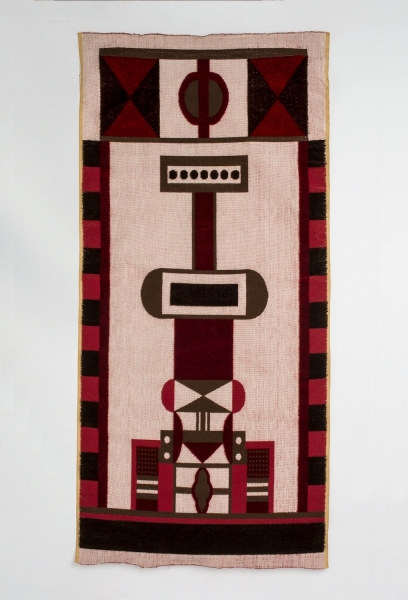 Together, they chose the colours for the cotton base and for the silk tuft of her design, which needed to be mirrored vertically down the centre line in this case. She first drew it with pencil on paper, then enlarged it to full-scale in order to verify the proportions, after which he made the technical drawings. “The great thing about Doppia Firma is that it brings designers together with talented people who create things,” she says. As for him, Bevilacqua was delighted with Du Pasquier’s design for being something new and out of the ordinary for a fabric-maker whose most modern weaving designs are from the 1930s. Art deco is his favourite style, but most of the reproductions he makes are based on much more ancient patterns from the past, commissioned by museums, churches and interiors of prestige. 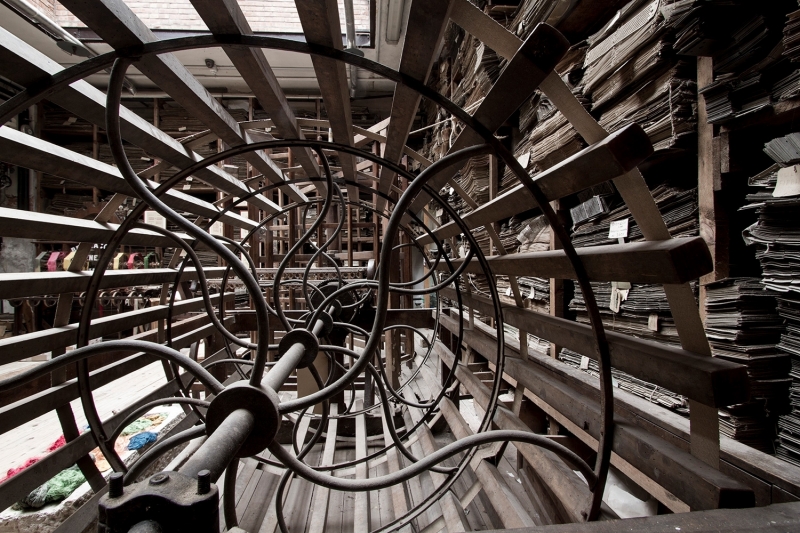 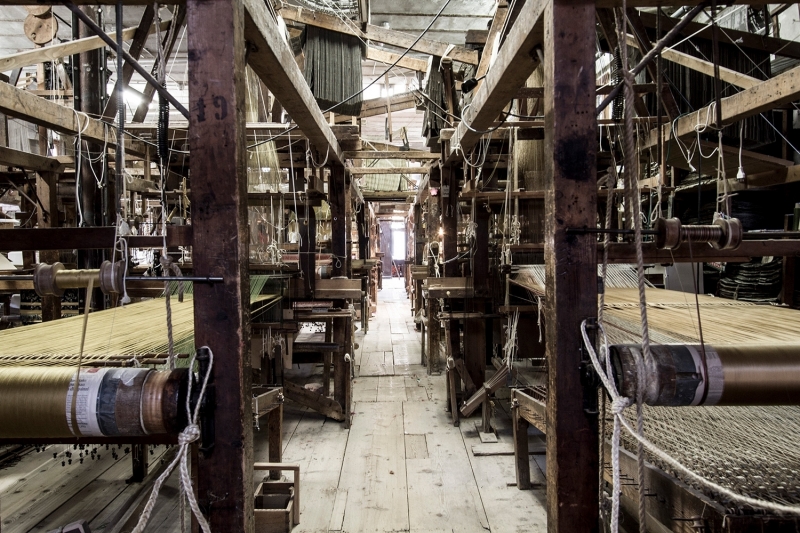 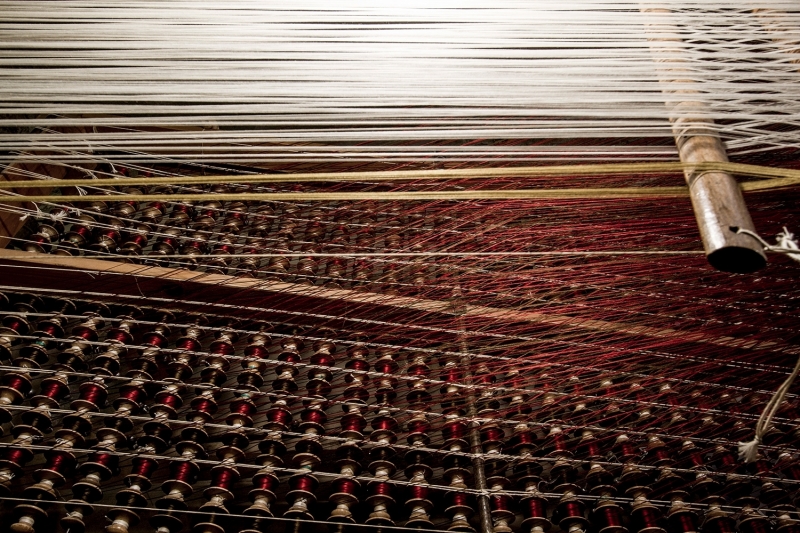 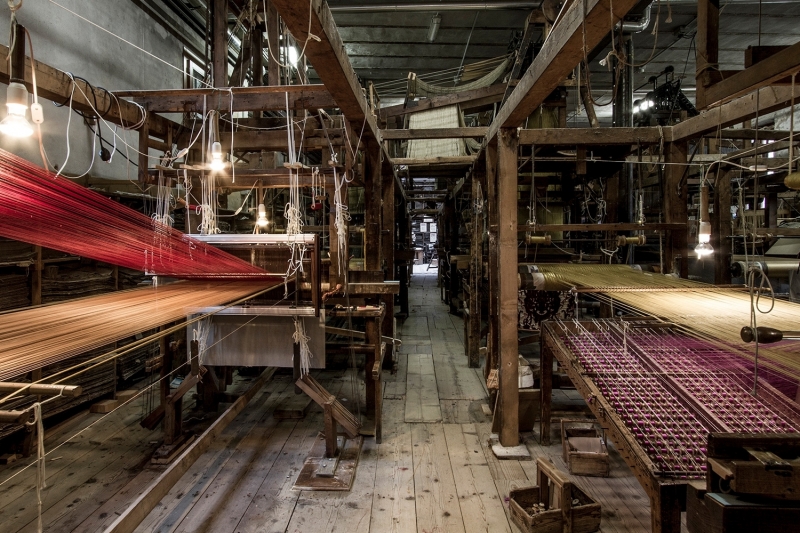 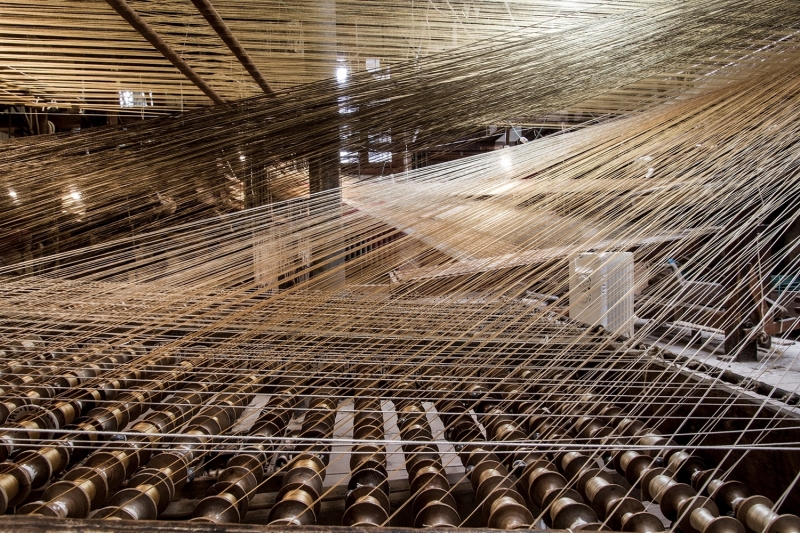 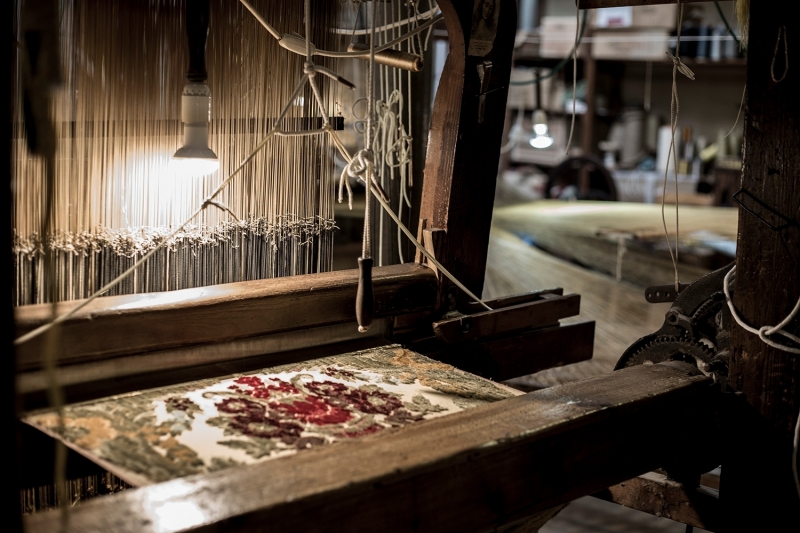 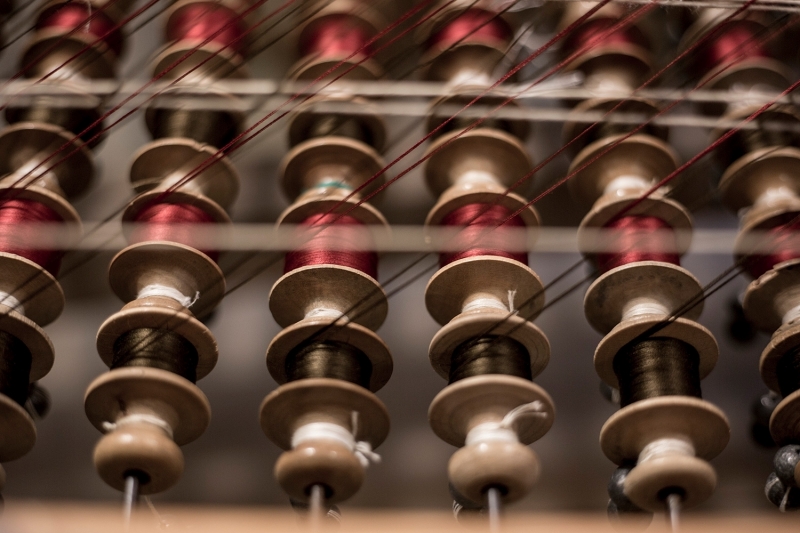 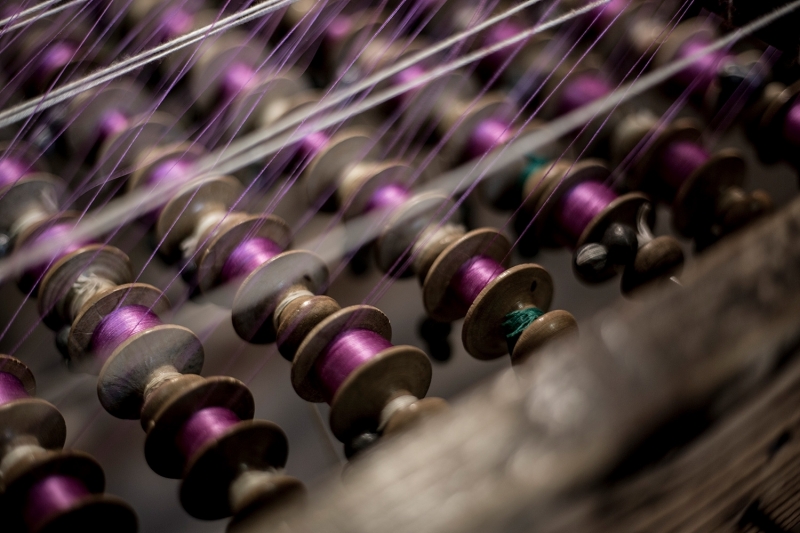 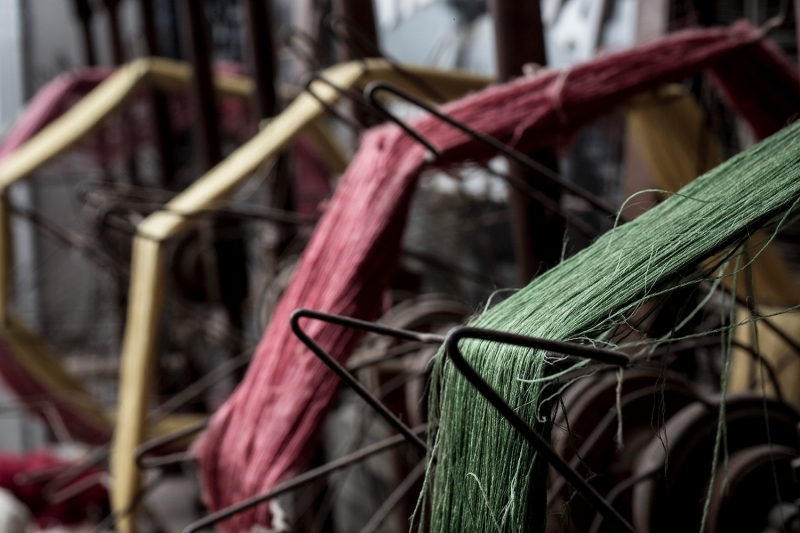 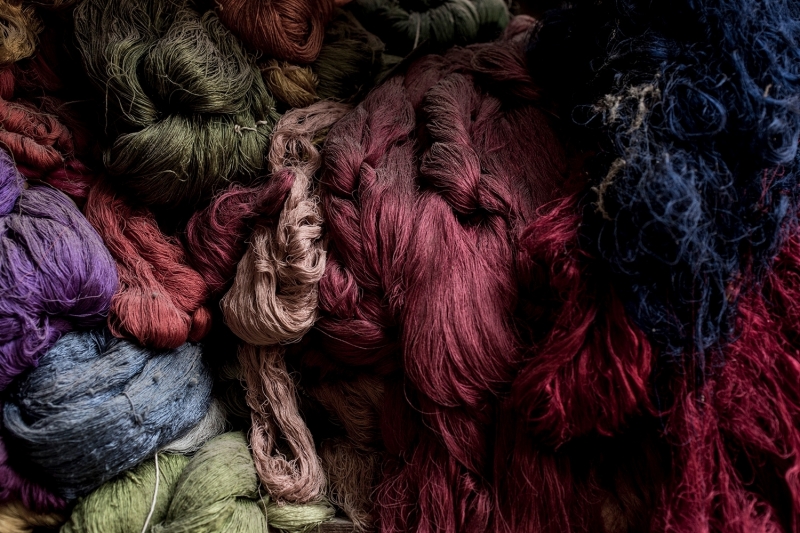 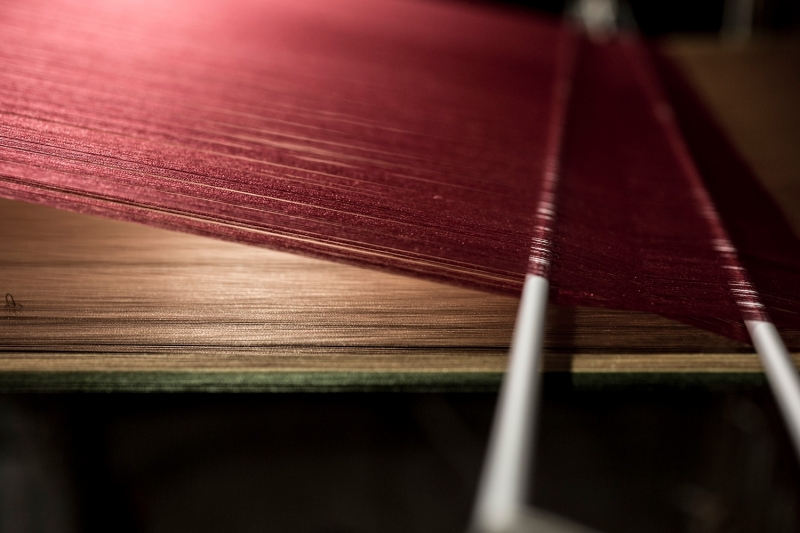 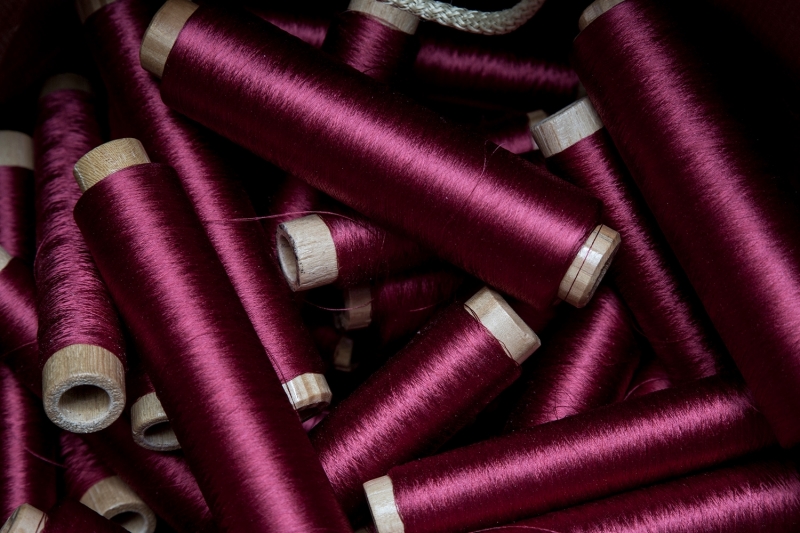 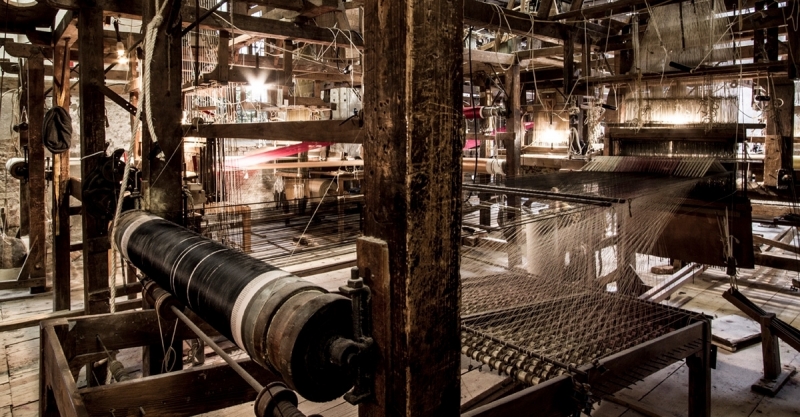 Nathalie Du Pasquier
nathaliedupasquier.com
Nathalie Du Pasquier was born in Bordeaux and has lived in Milan since 1979. Until 1986, she worked as a designer and was a founding member of Memphis, the design group united by Ettore Sottsass. She designed decorated surfaces: textiles, carpets, plastic laminates, as well as some furniture and objects. In 1987, painting became her main activity. She paints still life and geometric abstracts with flat colours. She also builds and paints furniture-size structures that are sometimes walk-in rooms. Five monographs of her work have been published, the most recent of which is From Some Paintings, conceived and designed by Nathalie Du Pasquier for the exhibition held at La Loge in Brussels in 2017.
Emanuele Bevilacqua
luigi-bevilacqua.com
After high school, Emanuele Bevilacqua worked for a while as an architectural draftsman. But since he grew up in a family that has been weaving brocades, velvets and damasks for three centuries, it wasn’t long before he entered the business begun by his ancestor Luigi Bevilacqua in 1875. Its wooden looms were already second-hand back then, built in the late 1700s and acquired from the silk-weavers school in Venice. Today, Emanuele creates classical designs for fabrics used in interior decoration. Following a complex mathematical process, he makes perforated cartoons of the weaving patterns. Inspiration comes naturally, given his familiarity with the company’s 3,500-piece archive.
Share the article